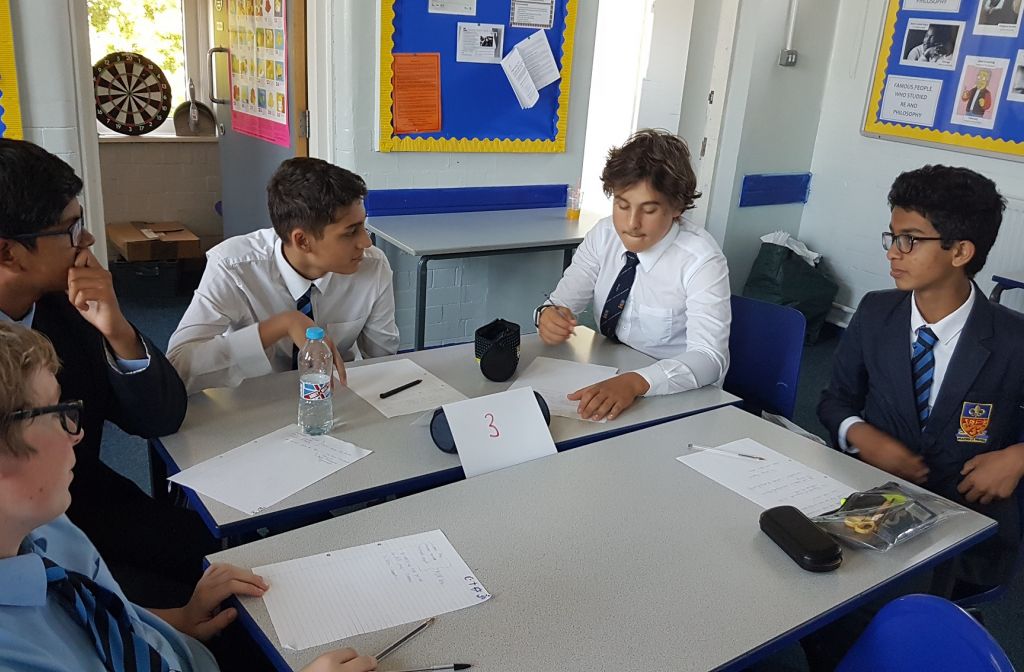 Elizabeth Hodkinson, Head of Department.  BA Religions and Theology and MA Medieval Studies University of Manchester, PGCE Religious Studies, University of Cumbria. Elizabeth joined LRGS in 2013, having previously taught in Bolton. She teaches the Philosophy of Religion side of the Pre-U Philosophy and Theology course and is particularly interested in church history, feminist theology and mysticism. Outside of school she is an avid reader and book collector, and is attempting to complete the '1001 Books to Read Before you Die' challenge. Before becoming a teacher she worked in a bookshop. She likes to dress colorfully and never wears black.

Alex Shorrock, Teacher of Philosophy, Ethics and Religion.  BA Hons Pure and Applied Philosophy UCLAN, PGCE Religious Studies, St Martin's.  Alex has recently been named as a Gold standard UK Parliament Teaching Ambassador by the Houses of Parliament.  Before joining LRGS Alex has taught for a number of years around the Lancashire area.  His passion for Religious Studies stems from his RS teacher at high school and he hopes to pass this on to the boys.  His hobbies outside of school are anything to do with water, so fishing, scuba diving, surfing and swimming.  He also likes to collect watches, and enjoys watching films and box sets when he gets the time.

The department aims to make the study of philosophy, ethics and religion exciting and relevant for our students. We do not teach dogmatically, but encourage students to use evidence to support their opinions and appreciate the perspective of others.

Year 7
We spend the first two terms of year 7 focusing on ultimate questions, such as ‘does God exist?’, is there a life after death?’, ‘do miracles happen?’, ‘why is there evil in the world?’ and ‘how do I become a moral person?’.  In the final term we look at some inspirational people such as Martin Luther King and Rosa Parks.

Year 8
In year 8 we take a look at the 3 major Abrahamic faiths, starting with Islam and the life of Muhammad (pbuh) then moving on to the life and teachings of Jesus and finishing off with Judaism and a brief (but tasty) look at religious food.

Year 9
In year 9 we take a look at some major ethical and real world issues. We start with a look at the holocaust, and this is supplemented by a talk from a holocaust survivor to mark Holocaust Memorial Day in January. We then go on to look at human rights, and issues such as torture, discrimination and immigration. In the spring we look at issues surrounding war and peace, looking at religious attitudes to war and pacifist movements. Finally we end the year by preparing for the GCSE course with a look at Buddhism and the life of the Buddha.

We look at two areas: Religious Belief and Practice within Christianity and Buddhism, and Philosophy and Ethics. In the lessons we will do a lot of discussion work and consider a whole range of contemporary issues. The course will teach you to think and to look at the world in new and exciting ways.

What will I be studying?

You will do two units. Each unit has a one exam of 1 hour 30 minutes at the end of the course.

Unit 1: Religious Belief and Practice
Ideas and beliefs in Christianity and Buddhism. We’ll look at various aspects of these two major faiths, including festivals, religious teachings, origins and history and how believers are active in the world today.

The second half of the course focuses on contemporary world issues, viewed from a religious perspective. These include; Issues of life and death, including abortion, euthanasia, environment, animal rights, relationships and families, including attitudes towards homosexuality, divorce, the changing role of women and family structures; Crime and punishment, including attitudes towards capital and corporal punishment, prisons and the aims of punishment and the existence of God and revelation- including the arguments for the existence of God, the relationship between science and religion, miracles and the problem of evil.

What skills do I need?
You need to be able to think about ideas with an open mind. You should enjoy discussing different points of view and giving your opinion.

What subjects go well with Religious Studies?
Humanities like History and Geography. Any of the Arts subjects and English Literature. Science and Maths make a good fit too, particularly when looking for evidence for the existence of God.

If I take Religious Studies what can I do next?
One route is to take Religious Studies or Philosophy at A-level or Pre-U. This can lead to a university course in a variety of areas: politics, philosophy, law, journalism, publishing, social sciences and arts subjects. Lots of jobs look for people who can think and consider new ideas.

Pupil comments:
‘Religious Studies makes you think deeper about your life and your own beliefs about the world.’

‘I do not believe in God but Religious Studies is my favourite subject. I like learning about other people’s faiths and stuff in the real world.’

In this subject you will consider abstract subjects and apply them to everyday life. Philosophy is about using rational argument and logical thinking to shine a light on life’s big questions. In doing so, you’ll get a greater understanding of the world we live in, and yourself.

Religion, Ethics and Philosophy has links to History, English Literature and Art, as well Politics, Sociology and Psychology.

Lessons involve lots of discussion and debate. These will help you gain a number of skills, including:

Philosophy is primarily assessed through essays and you should be prepared for this. You will need to read texts independently and a love of the written word would be a major advantage for studying this subject.

What does the course consist of?

The course consists of three papers:

Philosophy Paper- This paper focuses on the philosophical implications of faith. We’ll study the arguments for and against God’s existence, including the challenges from science and evil. We’ll also consider the implications of free will and language on how humans interact with the world, and what it means to actually ‘know’ anything.

Ethics paper- Ethics is primarily focused on how we decide what is right or wrong, and ethical theories such as Utilitarianism and those of Kant will be considered, as well as the potential implications of whether we have a conscience. There will also be some applied ethics, so issues around business ethics, euthanasia and sexuality will be considered.

Theology paper- This paper focuses on the role and development of the Christian faith and its impact on society. Topics include the life of Dietrich Bonhoeffer (a theologian and Nazi resister), death and the afterlife, gender and theology, secularism and pluralism and liberation theology.

What skills will I learn?
Lessons involve discussion and debate. They will help you gain a number of new skills:
How to think for yourself and question the norm
How to examine information in a critical way
How to form judgements based on clear evaluation of information.
How to put your point across clearly.

What can Religious Studies, Ethics and Philosophy lead to?
Philosophy is a popular subject to study at university. It is often combined with politics and ethics. Philosophy will fine tune your reasoning so that your enhanced intellectual skills can be used in a range of careers; Law, politics, civil service, journalism, advertising, education — to name a few.

What subjects go well with Philosophy?
The simple answer is any. Religious Studies and Philosophy has links to History, English Literature and Art. However, it makes an ideal match with science and mathematics as it involves thinking about ideas.