Despite several exam boards shying away from the Israel-Palestine conflict, the subject is still on the agenda at LRGS. The Guardian featured an article on this recently with input from Mr Davies and Mr Castle.

This article was a follow up piece after an earlier feature in The Guardian after a trip to Israel and the West Bank with teacher Mr Michael Davies. Mr Davies has produced an informative TouchCast where you can learn more about the conflicted histories of the Jews and the Arabs during 1914 to the mid1920s and then take a survey to test your knowledge. 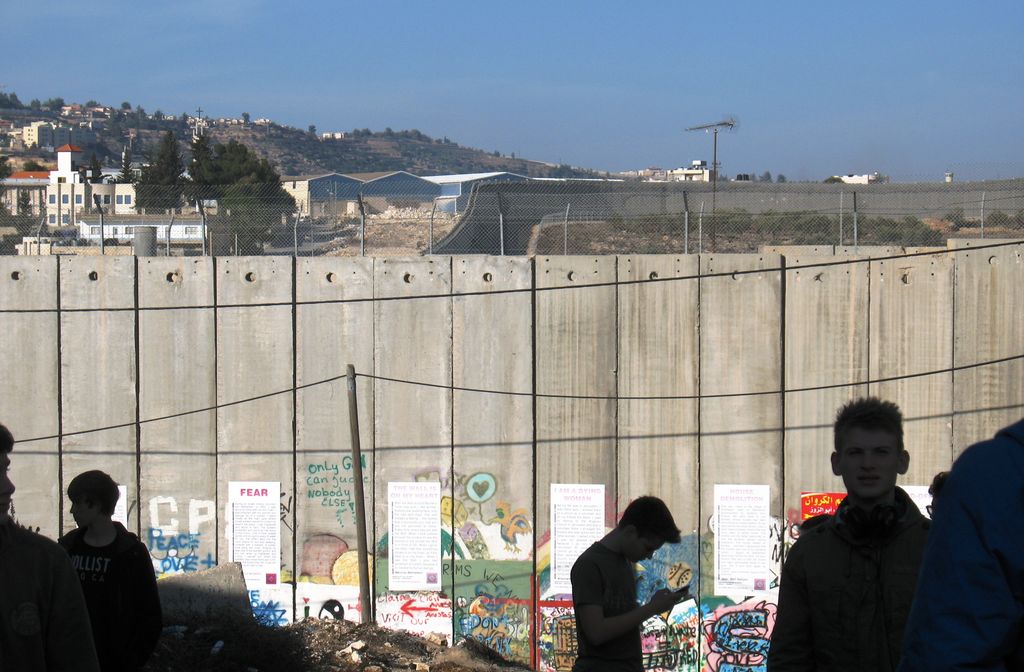 Satisfying our curiosity for the past is a basic human need. Research of the past forms the basis of our understanding of the present and the human condition.

At LRGS history is an exciting and dynamic subject where students and staff explore many aspects of the past from around 1000 AD through to recent events.  We place great emphasis upon the human story and delve into the art, culture, and traditions as well as the economic, religious, political and military background of a period.  We strive for academic excellence and believe that wide reading and active and collaborative learning are the best way for boys to achieve a real historical understanding.  Consequently students and staff spend considerable time outside the classroom on a wide range of research activities both in the UK and abroad. The history department offers a rich diet of extra curricular activities and opportunities, some of which are jointly run jointly by boys and staff.

H J Castle  BA, St Chad’s College, Durham (Head of Department)
Hugh Castle has been head of department since 2001 and has taught History at LRGS since finishing teaching practice here in1991. He is a proponent of "Applied History" and sees the study of History as essential to any understanding of the modern world. He advocates field study and active learning and leads many of the department’s trips. Particular areas of interest include Anglo-Irish relations, C17th British History and the History of the Middle East.  He leads the "Parallel Histories" program in schools, is active in the Lancaster-based “Documenting Dissent” project supporting students in local research and is involved in the Prince's Teaching Institute. He is a "Teacher Governor" at LRGS, a member of the "Well Being" Committee and is  a strong supporter of the arts. Other interests include reading, song-writing and travel and an inexplicable fascination for Leeds United.

C W Atkinson BA History & Education, Lancaster University
Craig Atkinson retrained as a History teacher in 2004 and arrived at LRGS in 2008.  He has a passion for history and specialises in Medieval history and the history of warfare. He is Housemaster of Ashton House, staff representative for the Old Lancastrians and  heavily involved with sport: he coaches the U13 rugby team and the U14 cricket team and provides specialist coaching to the 1st XI.  His proudest achievement as a cricket coach is in taking the LRGS 1st XI to the final of the Sir Garfield Sobers International Schools Tournament in Barbados. His most disappointing moment was losing the close final. Robert Peel would receive his vote as Prime Minister, the Duke of Wellington would captain his historical cricket team and Julius Caesar would captain his rugby team from Fly Half.

J Reynolds  BA History and Politics, Newcastle, MA in Education, Cumbria
Jamie Reynolds is a combined Politics/History graduate of Newcastle University and his particular interests lie in the interaction between Politics and History and how political theory has been applied in History. His particular interests range depending on his mood but currently this appears to be elements of the 19th century and more recently the importance of economics in history, particularly the dominance of capital. He is involved in a number of other areas than the History Department such as coordinating the Extended Project Qualification and running the 1st XVI football.

M E Davies  MA Oxon (Christ Church) History Advisor
Michael joined the department in 2000 after a twenty year career in business, half of which was spent in the USA. He teaches History across the School and has a particular interest in the Middle East. The History Department beIieves strongly in the importance of students visiting the places we study and he has led school visits  to Paris, Berlin, Dublin and Belfast, and most recently to Israel and Palestine. In 2015 he was awarded a prestigious Winston Churchill Memorial Trust Travelling Fellowship to research the way that schools in Israel, Jordan and Palestine teach their own history.  He has also been working on a project called Parallel Histories studying the history behind the conflict between Israel and Palastine. The project encourages schools to teach controversial, challenging historical topics.
Mr Davies retired in July 2018 but continues his work with the department as an Advisor.

J V Love M A Cantab (Pembroke)
Jill Love has taught part time at LRGS since 2014. She enjoys teaching all historical periods, but particularly the 20th Century. Jill has begun to develop links with primary schools, taking groups of boys to do workshops in local school on topics such as World War I. She enjoys reading and has enrolled the school in  the Historical Association’s ‘Young Quills’ project to encourage the reading of historical fiction across all ages, including primary schools. She also teaches Geography and Values and supervises EPQ candidates. Her favourite king is, without doubt, Henry VII and favourite revolutionary, Lenin.

A. L. Wareing, BA (Hons) Durham University, MA in Education, Edge Hill University
Louise Wareing was delighted to join the History Department in 2018. She has taught and led History Departments in several different schools during her twenty year career, covering a vast range of GCSE and A-level topics, as well as A-level Politics. She loves social and political history, seeking always to bring a local aspect to the bigger picture. She is assisting with the Parallel Histories project and is also leading a second Erasmus+ European project focusing on employability skills. Her other big interest is PSHE (Values) and helping all students to bridge the gap between school and their future. She is a 2nd Lt in the army section of LRGS CCF and enjoys all sport. Favourite historical figure: Lord Ashton.

We have revised our KS3 scheme of work in light of changes at KS4 (now 50% British history) to ensure that students get a broad perspective. We explore the period 400 AD to recent events taking an investigative approach that ensures that we learn about the past from different, sometimes conflicting perspectives. When using text books we use the SHP “Making sense of History” series as a basic text.

Threads running across Y7 to Y9 include:

Who are the British? Exploration of immigration and emigration.

Rulers and ruled: Perspectives of the past.

Our place in the world. How far was Britain part of Europe?  Different perceptions of Empire.

Projects:  Y7 - Crusaders or Invaders? Y9 - Is it ever ok to target civilians?

What will I learn?

This is a new specification reflecting the Government’s increased focus on British History:

Extra-curricular Projects
We offer varied opportunities outside the classroom via the History Society (debates/talks etc) as well as exciting trips to France/Belgium for Medieval, WW1 and WW2 sites. In recent years we have also offered a field trip to Berlin/Nuremburg and when the local situation has allowed we run a trip to Israel/Palestine that is open to Year 10 and 11 boys.  Other projects include occasional theatre visits, films, the History through Art project and “Documenting Dissent”, a project that helps students investigate a theme of their choice using primary and archive resources in a supported environment. Professor Martin Alexander (OL) is leading an exciting Oral History project for L6th and U6th boys and heading the development of the school archives with the assistance of members of the History Society.

A-level History is an exciting and dynamic option. In a supportive environment we aim to stretch all our students according to their ability so that they develop the skills they will need after leaving LRGS.  Through a rich diet of experiences both in and outside the classroom, students gain an appreciation of the importance of the past and its’ value in a fast changing world.

Lower Sixth: We avoid revisiting ground covered at GCSE and instead broaden our students’ understanding of how the modern age was shaped through the investigation of “Revolutions” and their consequences. These events shaped the Modern Age.

Every year LRGS students apply for and go on to thrive studying History at the top universities (including Oxbridge) and we provide tuition to help them in this process. Many study History at A-level for the skills the study of History promotes- highly sought after by employers across a wide range of occupations; law, journalism, politics and broadcasting. The most commonly held first degree for Chairmen of the Fortune 500 Companies is History.

Outstanding A-level results and careful preparation for university are particular strengths of the History Department.

In the Sixth Form you will research in more depth and engage in more sophisticated debate and discussion, developing your own lines of inquiry. This will include examination of the credibility of historical arguments as well as sources. Independent study as well as group work and debate form an integral feature of the course. Students are expected to read around the subject so that they can contribute meaningfully to discussion.

We want our boys to engage in historical research and debate and to explore their own interests. One excellent student-led vehicle for this is the thriving History Society. In addition, visiting speakers to lessons, after school and lunchtime events are frequent and we steer students towards essay competitions, public speaking and community research projects. We guide students through the application process and run sessions for those applying for the HAT test through the Lower Sixth and Autumn of U6th. University uptake of those studying history at LRGS is high.

Exam timings
A-level exams are in the second year of study. L6th examination is by internal assessment. Coursework is submitted by Easter of the U6th.

Sixth Form pupil Max Tse said: “I have found the History Society a really interesting way of exploring my interests, but the highlight for me this term as part of an LRGS Oral History project was interviewing a WW2 veteran, who was amongst the first to enter Belsen concentration camp.”