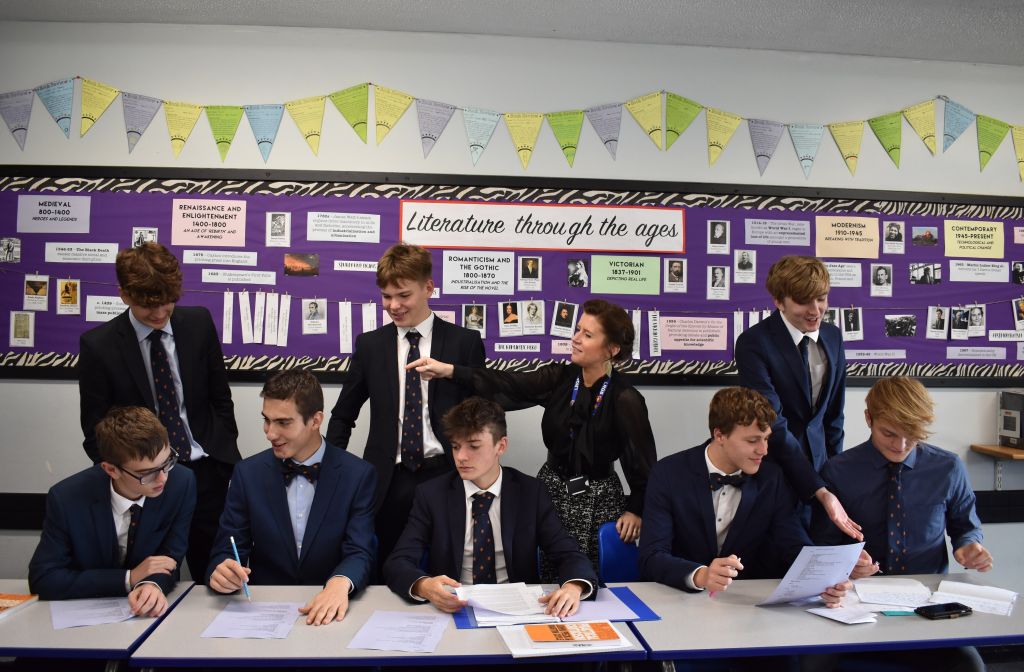 1  To provide our boys with a keen understanding, interest and proficiency in their use of language, both written and spoken.

2  To show them the nature of the society and world in which they live, both through direct observation and through the books, plays and poetry which we teach and which we encourage them to experience independently.

3  To inculcate in them a love for the material they have studied - which will remain with them for the rest of their lives.

4  To enable them to obtain examination results which will allow them to make their own career choices.

5  That the boys will enjoy our lessons and find them worthwhile and stimulating.

English as a subject is unique in that its borders are so wide. Our interests cover both traditional Literature and all forms of media; likewise we are as concerned with the teaching of grammatically correct Standard English through learning about the history of the language and the origins of its dialects at home and abroad. Similarly, it is hard to say where the classroom stops and where extra-curricular activity begins. The lesson-time debates lead on to debates in local and national competitions. The good speaking and reading encouraged within the timetable appears in readings during the carol services. The teaching of a play is often accompanied by seeing it performed in, for instance, Manchester or Preston.

Miss Mitchell, Head of Department
Miss Mitchell joined LRGS in 2014. She previously taught at Ripley St Thomas Academy and has also worked for other organisations delivering training to teachers, in addition to her role in the classroom.  She is a regular member of a pub quiz team and enjoys fine dining; they are currently spending their winnings eating out at restaurants featured on the television series ‘The Trip’.  Miss Mitchell has a degree in English Literature from Lancaster University.

Mr Ashbridge has been teaching at LRGS since 1996. Prior to that, he taught in local schools and at Lancaster University and St Martin’s College. His interests include the life and work of Robert Louis Stevenson; he is also interested in contemporary fiction, with – he says – too much of a tendency toward detective novels; he listens to a wide range of music and enjoys the cinema. He is a long-suffering supporter of Carlisle United, and has both BA and MA degrees from Lancaster University.

Mr Hirst taught at LRGS from 1979-1985 and then returned in 2008 as Head of Sixth Form from Stowe School, where he had been a Housemaster and then Director of Studies. He originally graduated in English Literature from Leeds University, gained his PGCE at Newcastle and an MA in Late Victorian and Early Modern Literature from Manchester.

Mr Novell has taught at LRGS since 1983. He gained at MA in English Literature from Lancaster University and among his many interests, he is passionate about cinema.

Mr Rafferty joined LRGS in 2015. He has previously taught at Ripley St Thomas Academy after having completed a BA in English Literature at Manchester Metropolitan University. As well as an interest in reading and writing, he is a keen cricketer, playing for local team Shireshead and Forton. Other hobbies include playing and watching football, writing and playing music, quizzing, going to the cinema and eating out.

Mrs. Gibson joined LRGS in 2017, having spent the previous nine years teaching English at LGGS, where she worked as Head of English, Head of KS4 and as a part-time English teacher.  Previous to this, she was Head of English at St. Thomas a Becket Catholic College in Wakefield, after having gained a BA in English Literature and History of Art, and a PGCE at Leeds University.  She enjoys choreographing the joint school productions and also sings in a local choir.  She is a keen potter and loves to bake cakes, read poetry and attend story-telling events and music gigs in her free time.

At LRGS in Years 7-9 pupils study a different literary text each term which is designed to give them a broad experience of genres, time periods and writers. They will get a balanced diet of plays, poetry, literary prose and factual writing so there’s something to interest every type of reader.

During each term in Years 7 and 8 pupils also study in more depth one type of writing which will be one of the tasks they’ll be asked to produce for the writing section of their end of year exam. By the time pupils reach Year 9 they’ll revisit these text types, this time one every half term, to consolidate their knowledge.

In addition to completing reading and writing tasks pupils will work on developing their oracy, working with others as well as presenting information individually or even taking on roles in dramatic works, to ensure we are creating confident competent speakers of the future.

We are fortunate at LRGS to have an excellent library run by a knowledgeable and enthusiastic librarian. Pupils in Years 7-9 have one lesson a week in the library to pursue their own interests and develop reading habits that we hope will last a lifetime.

In Years 7-8 pupils follow the Accelerated Reader scheme and at the beginning of a term will complete a reading age test. They are then given a points target that they work towards for the rest of that term based on reading for 20 minutes per night. Each book they read is worth points and when they’ve finished reading they complete quizzes to earn points towards their target. Every week class teachers will discuss the boys’ reading material and their progress along with being able to monitor their understanding of texts. The boys get very competitive and it’s not unusual to see boys achieving their targets many times over!

In Year 9 we encourage pupils to move beyond children’s fiction if they’ve not done so already and to extend their reading into more sophisticated titles. Pupils take part in book group type reading sessions and recommend more advanced reads to one another. We also enjoy shadowing a number of book awards throughout the year.

Every pupil will study for two GCSEs, one in English Language and one in English Literature, from the Eduqas exam board.  Both GCSEs offer exciting opportunities to develop analytical thinking, detailed critical appreciation of language and to further refine and polish communication skills needed both in the classroom and way beyond.

The English Language qualification tests a number of skills.  Pupils need to be able to read and interpret texts, offering their own opinions based on evidence and they are also expected to be able to write accurately for different purposes and audiences. As part of a separate grade (pass, merit, distinction) reported alongside the English Language GCSE pupils will also give an individual talk and respond to questions from an audience.

English Literature is the study of different genres and writers and pupils will read and comment on a variety of different texts, with four set texts in total and a further unseen element to the exam. Pupils could go back as far as Shakespeare and be studying something as recent as Blood Brothers and it’s not unusual for us to combine this element of the course with trips to the theatre to bring the texts alive.

Students who respond well to new ideas, embrace challenging texts and enjoy lively classroom discussions thrive on this course which, as its name suggests, is an excellent preparation for university study and very well regarded amongst academics.

The course encourages the study of a wide range of texts from comedy to tragedy and everything in between.  On top of this, Unit 4 of the Pre-U paper offers you the opportunity to study texts that you’ve chosen, devising your own area for investigation which you’ll turn into an essay question, the end product being a mini dissertation.  This will give you the skills and confidence needed to tackle similar tasks at university and is really an excellent chance to develop an interest in and passion for almost any aspect of the subject.

The Whewell Society dates back to the early twentieth century and is still going strong, debating the weird, wonderful, thought provoking and amusing most Friday lunchtimes.

Older pupils are also training the younger years in the lower school debating society, continuing this proud tradition.  In addition the students run the Literature society, enjoy numerous theatre visits as well as talks from guest speakers including writers and academics.

We enjoy participating in a wide range of competitions and cultural events including: staff and students coming together to shadow the Man Booker Prize, entering nationwide debating competitions, the in school spelling bee competition, inter-form reading competitions and taking part in the Kids’ Lit Quiz. 2018 even saw the launch of the Cryptic Crossword club!

With so much going on there’s bound to be something you can get involved in during your time at LRGS.