The Physics Department is located, together with Chemistry, in the science block, called the Mawby Centre. There are three laboratories that are used primarily for Physics, as well as two smaller classrooms, designed for teaching Sixth Form sets. A central Preparation Room and workshop provides the support services and acts as a base for the technicians. 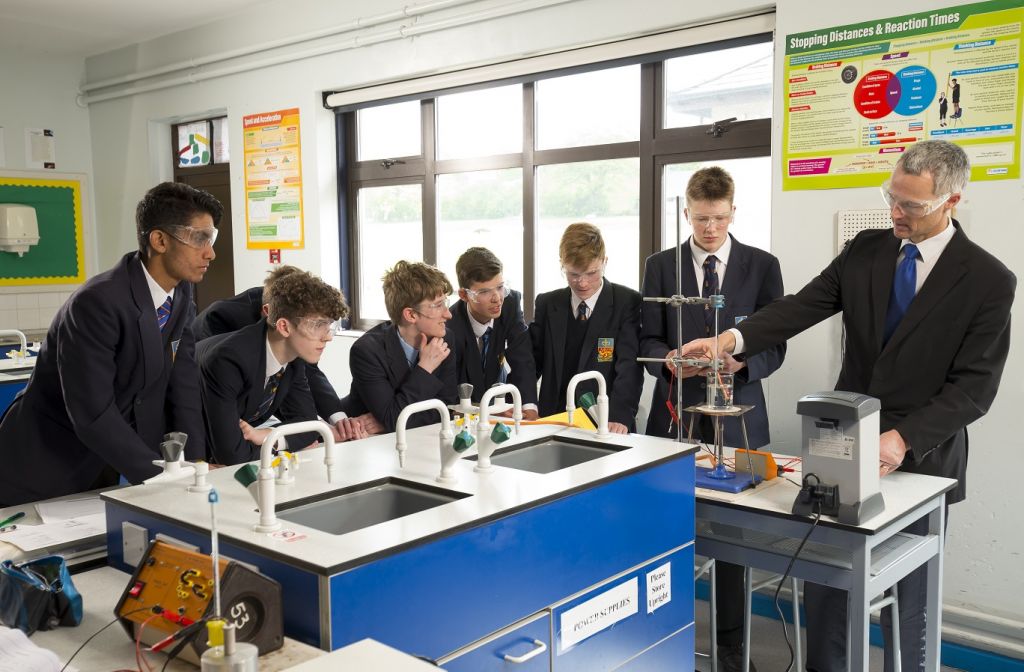 The Department is well equipped and the emphasis in lessons is to include as much practical work as is possible. A large number of students choose to study Physics beyond the compulsory GCSE course, continuing to AS and A2 level, usually with four or five sets in each of the Lower Sixth and Upper Sixth years. We achieve excellent results in exams and in recent years, there has been an increase in the number of pupils who go on to take Physics at university.

We teach the Key Stage 3 course in Years 7 and 8.  We then start the EDEXCEL Certificate in Physics in Year 9. We continue to teach this in Years 10 and 11 and it is examined in two written papers in June of Year 11. The aim of the Physics Department at Lancaster Royal Grammar School is to develop individual students to their full potential, to educate them in all aspects of the theory of physics and its many applications to everyday life in the real world.

Mr S Bell, Head of Department
Mr S Bell teaches Physics to all year groups.  Mr Bell started at LRGS in 2009. Before that he taught at QES in Kirkby Lonsdale, at Hutton Grammar School and in Zimbabwe. He enjoys outdoor activities, especially standing on the top of mountains.

Dr C Ellwood joined the Department in September 2004, having spent the previous two years teaching at Queen Elizabeth's School, Kirkby Lonsdale. He teaches Physics to all year groups, as well as the Maths for Physics course in the L6 year, and is in charge of sailing at Pine Lake.

Mr M J English joined LRGS from Bedford Modern School where he taught Physics for seven years. Earlier in Canada he was involved in Positron Emission Tomography (PET) research.  Initially he obtained a BSc in Physiology from King's College, London followed by a BSc in Physics and an MSc in Medical Radiation Physics, both from McGill University, Canada.

Dr D R Rowe joined LRGS in 1994, after completing a PhD at Lancaster University. He is Assistant Head (Information and Systems). He is the officer in charge of the Army Section of the CCF and teaches Physics to all year groups.  He is the Science Coordinator with responsibility for the Primary School Science programme.

Dr A Shawcross joined LRGS in September 2004, having spent three years teaching physics at Dallam School.  He teaches physics to all year groups, he manages the school's Duke of Edinburgh Award scheme and he runs the annual Year 7 residential trip.  Dr Shawcross also enjoys rock climbing and other adventurous activities.

11+ Curriculum
All pupils in each of the first three years study each of Physics, Chemistry and Biology for just less than two periods each subject each week. In the following two years this increases to two periods one week and three periods the following week, alternately.

Year 7
• Forces and their Effects
• Energy Types and Resources

Is there much opportunity to do practical work?
In addition to covering the topics outlined above, the Key Stage 3 course also covers practical and other scientific skills like researching information and looking at the history of science. Practical experiments and investigations are routinely undertaken to enhance scientific methodology and concepts. These skills build and enhance both future work and basic scientific literacy.

Is there opportunity to use ICT?
Increasingly the boys are given chance to research subjects independently using the internet resources and develop modelling programmes. The Science Department has its own suite of laptop computers and of course can use one of three dedicated IT labs.

13+ Curriculum
All pupils in each of the first three years study each of Physics, Chemistry and Biology for just less than two periods each subject each week. In the following two years this increases to two periods one week and three periods the following week, alternately.  At GCSE all students take Physics and achieve their GCSE at the end of Year 11.

In what format are the external exams?
There are two papers of 2 hours and 1 hour, both taken at the end of Year 11.

In the Sixth Form we offer the AQA Physics.

The Institute of Physics organises the Physics Olympiad Competition and this has been routinely entered with great success for several years by students in their U6 Year. Many students gain awards including the gold award for being in the top 50 students nationally.

The Nuffield Science Bursary Scheme provides outstanding candidates with opportunity to spend four weeks researching an investigation at a high academic level, usually in a university department and often leads to a Crest Gold Award being achieved. Regular expert outside speakers are invited into school to give stimulating lectures and thought provoking discussions.

Where can I find out more?
The examination board (AQA) has a very useful website in which the full specification, past papers and mark schemes, guidance and examiner’s reports can all be found. The address is www.aqa.org.uk