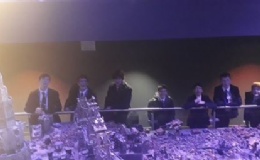 On the morning of Thursday the 5th of December, ten boys gathered at the foot of the New Building in the pre-dawn gloom. Despite having risen at 5am, there was no bleariness in any eye, but only a steely determination intermingled with excitement. Today, the boys were here to finish a path that the club had set out on three years ago.

Three years ago, then-club-leader Will Burrow had decided to take us to the Warhammer Schools’ League – a series of inter-school tournaments. With the aid of Mr. Dower, he made contact with the organisers and arranged for us to receive a starter pack. However, due to his own busy schedule, the promised attendance never went ahead. The next two club leaders, Amos Daw and Matty Hanratty, whilst they hoped to attend, focussed more on building up the club’s collection of loan models for new players, which brought us an unprecedented membership level. This paved the way ideally for Ben Davies and I, who, when we took the reins at the end of last year, immediately began planning to attend a Schools’ League (now re-named to Schools’ Alliance) event at last.

We decided to start with the small-scale, teamwork-focussed Kill Team Doubles event, and, after gathering ten interested players, spent a half-term playing practice matches against each other every week, before the great day finally rolled around.

After the long drive to Nottingham, where Warhammer World, the site of the tournament, is situated, the boys disembarked and piled into the enormous converted warehouse that forms the heart of the global Warhammer community. Due to slight delays in the journey, we had no time to look around before being rushed straight into our first of three games.

Playing on a harsh one-hour-per-match time limit proved challenging for the boys, especially given the various tough opponents they faced. Henry and I ended up against the champions and second-placers from last year back-to-back, much to our misfortune, whilst Ben and Raphael had to explain the rules as they went along to one of their rather under trained opponents and Mani and Nate soldiered on in the face of outright cheating and rule-bending in their third game. Not that that was common – in general, the opposition was cheerful and polite as well as highly competitive, a practice encouraged by the fact that 1/5th of the score was determined by the Favourite Game votes of the opposition.

After the final game was concluded, a few of the team wandered off to peruse the extensive miniatures on offer in the shop, whilst the remainder took part in the friendly quiz (in which Ben, Raphael, Henry and I achieved a joint second place between us – most of the questions were remarkably easy). Then it was time for results; we recalled our full contingent and awaited the declarations.

Having won all three of their games, Max and Tom achieved the coveted silver trophies for second place, prompting loud cheers from the rest of us, whilst Ben and Raphael managed to secure a Most Sporting prize by being the only team to receive Favourite Game votes from all three of their opposing teams. An excellent result, for our first event and against a field of perhaps a hundred competitors representing the cream of the nation’s Warhammer-playing youth.

The team finished the day with a tour of the massive and impressive miniature dioramas in Warhammer World’s museum, before returning home, tired, but flushed with good cheer. The legacy of Will, of Amos and of Matty had finally reached fruition; and the honour of the school had been well and truly upheld.