Israeli and Palestinian Issues Debated by Students from across the District 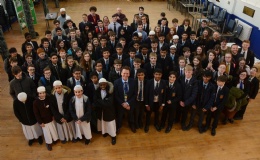 LRGS hosted an all day workshop with Year 9 pupils from schools around the district to debate ‘Solutions not Sides’.

As part of the ongoing Parallel Histories project at LRGS pupils debated issues including; Should Britain be praised or blamed for the Balfour declaration? Other pupils are working in teams together, assisted by Sixth Formers, to investigate the use of force in Nakba.

The information and research learned by the pupils during their morning workshops was put to work in the afternoons debates.

Over 100 students from 7 schools took part. Thank you to all the schools who came - your students were brilliantly articulate and worked well with students from other schools.

Here's a quote from one of the teachers: “Just wanted to thank you for today, we had a great time and the kids loved it!! We got into the mini bus and students announced “that was the best day ever” - high praise indeed. They were on an absolute high and the Head was over the moon to see them so enthused.”