My Life in Pictures by Will Fraser-Gray 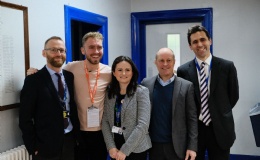 On the morning of Wednesday December 18th, LRGS welcomed back one of our most fondly remembered Old Lancastrians, Will Fraser-Gray who left the school at the end of his Upper Sixth year in 2017.

Dr Pyle described Will as ‘One of the most talented sports people the school has produced.’ and an ‘all-round good guy.’. After leaving LRGS, will went across the Atlantic on a football scholarship to a university in Georgia. Everything was going well for Will until his crash on March 31st earlier this year.

Will and his teammates had headed into town after a game earlier that day and the night progressed no differently to any other. This was until the group of eight got into the car to head home. Five of the passengers were not wearing seatbelts as it is not a legal requirement to do so (in the back-seat) in Georgia and it later transpired that the driver had been drinking although he was not over the legal limit and none of the passengers were aware of his drinking. The car crashed, flipped 7 times and Will was thrown from the car. He suffered severe brain trauma, a broken neck, lacerated spleen and liver and a punctured lung. He was rushed to hospital at which point his mum received a call and instantly organised transport across to America. As his parents were travelling over, they had no idea whether Will would still be alive when they landed.

Will said to the audience of sixth formers that wearing a seatbelt didn’t really occur to him, and that he ‘Thought he was invincible, and that something like this could not happen to him’. This was where the first message Will wanted to convey really came across, the importance of thinking before you act and making sensible decisions. This message was especially well received by an audience that are either currently driving, or about to start learning to. It showed how easy it is for things to go badly wrong, how something that seems as trivial as not wearing a seatbelt can have life changing consequences.

Due to the swelling of his brain, Will had to have half of his skull removed and replaced with metal plates before his recovery could begin. After the operation, Will was unable to eat, breathe or walk on his own and was completely reliant on his family and the staff at the hospital for everything. However, little by little, Will began to recover and tried his best to remain positive. He said, ‘At no point did I entertain the thought of not playing football again.’ He did admit that it was a very tough time for him mentally, but again he stayed positive telling us that ‘Whatever you’re going through, however hard it is, you can still achieve the unthinkable.’ I think this really resonated with the audience; I know it did with me. You hear messages like this all the time but I guess it hits differently when it comes from someone like Will, someone who we can really relate to and learn from. The importance of this message was further impressed upon us by the Will’s story about Greg, the ex-LRGS pupil, and Will’s close friend, who tragically took his own life. It’s important that as a school community we do as Will said, ‘Talk to each other, trust each other and look after each other.’

Fortunately, Will’s assembly did have a positive ending. His recovery is well under way and there is a hope that he will be able to play football again before the end of this season which would be amazing for everyone who knows Will, his family and Will himself so I think I speak for everyone at LRGS when I wish Will a speedy and successful full recovery. If anyone can do it, it would be Will.

Dr Pyle, I think, summed Will’s words up really well as them being ‘powerful stuff’ and leading to us all feeling ‘enormously inspired’ and thanking Will for the assembly and saying that it was a ‘joy to have him back’. Ms Haigh described Will’s assembly as really showing the ‘power of positivity’.

The twenty minutes Will spoke to us were a roller-coaster emotionally. The assembly was incredibly moving and hard-hitting but also so inspiring and so unbelievably positive given everything he has been through. I think it is fair to say that Will Fraser-Gray, and the assembly, is absolutely the embodiment of what LRGS is all about; positivity, never giving up and the power of a strong community.