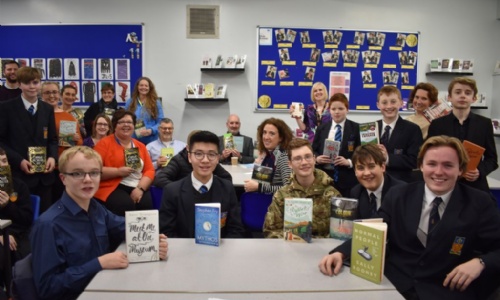 A huge thank you to all students, parents and staff who attended the discussion about the 12 books nominated for the Costa Book Awards on Tuesday evening. The debate was both light-hearted at times and intense at others as the various plots and characters were unpicked and analysed. With over 40 participants in attendance, we were never short of opinion. After over an hour's deliberation we chose our winners in an open vote. Our results were as follows:

Best Debut Novel: Meet Me at the Museum- Anne Youngson

Incidentally, the Costa judges agreed with us on only one of the categories, instead choosing Hilary McKay's The Skylark's War as Best Children's Novel and Stuart Turton's The Seven Deaths of Evelyn Hardcastle as Best Debut Novel.

Mr. Rafferty said, "It was absolutely incredible to see so many LRGS families involved in this challenge. Over 100 people read at least one of the books, and 4 people even managed to read all 12 in the 47 days! The most pleasing aspect was the amount of dialogue that was evident. Many parents commented on how nice it was, first of all, to be reading again (particularly outside of their comfort zone) but secondly, to be talking to their sons about the books they'd read. The opinions the boys expressed and the manner in which they expressed them in Tuesday's meeting showed great confidence and maturity.

If anyone would like to get involved and to read any of these books, just let Mr. Rafferty know as all 12 of the nominated books are still available to borrow, as are the 6 books that were nominated for the Man Book prize last September.

Coming next: The PEN America Hemingway Awards (Jan-Feb), and look out for Mrs. Love's Historical Fiction Challenge, too!